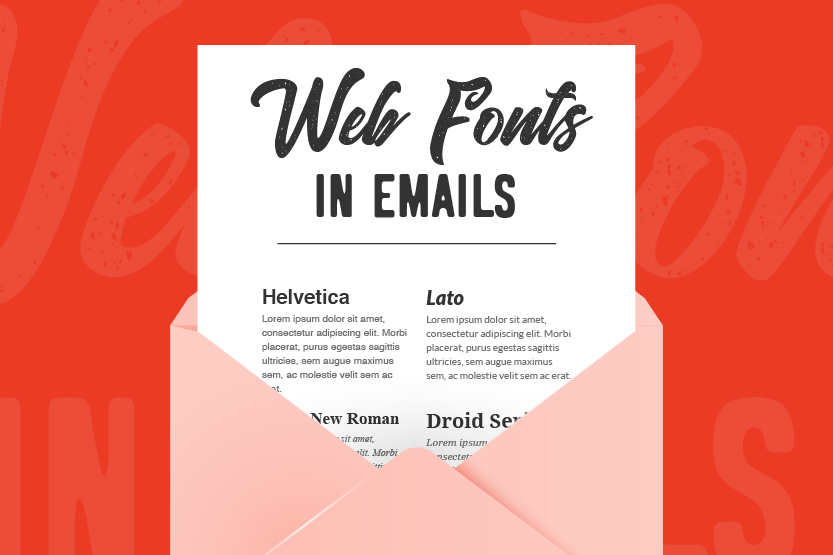 Web fonts are gaining support beyond websites and apps. While their inaccessibility hasn’t changed much, ESP and email client capabilities now support many of the HTML email development methods that developers can use to make web fonts accessible. So, what’s now showing in a computer near you? Web fonts in HTML emails!

Why Web Fonts Didn’t Work in HTML Emails Before

Designing with web fonts in HTML emails used to be bad practice.

Firstly, web fonts lacked accessibility. They were and are still not common fonts like the ones that come with computer Operating Systems. Instead, HTML email developers promoted the use of web safe fonts: Arial, Helvetica, Times, Trebuchet MS, and more of the familiars. Back in 2010, Campaign Monitor shared a collection of HTML email designs based on these web safe fonts. Indeed, web safe fonts were the norm.

A web developer can easily add a custom font to a website. For example, a web developer might use the @import rule to load custom fonts from a Content Distribution Network (CDN) like Google Fonts or Adobe Typekit. Another method to add web fonts in HTML emails is using the <link> tag to a CDN instead of the @import rule. Both methods required placement within a CSS <style> tag in the HTML document’s headers to load the fonts. Finally, a third method to add web fonts in HTML emails is to host a web font yourself (properly-licensed of course) and distribute it to your website viewers via @font-face.  Web font loads cannot be inlined; it’s these rules or not at all.

For starters, more email clients respect the <style> tag, especially in the <head>. For example, Apple Mail, Outlook, and Yahoo! Support a <head> <style>. Even Gmail has expanded its support to include its Android and iOS apps, webmail, and G Suite.

Further, while HTML email support for <style> has expanded greatly, the methods to add web fonts in HTML emails has more increased support than before.

@font-face is winning over big email clients. As of this writing, Campaign Monitor’s CSS Support Guide for Email CSS indicates Apple Mail, iOS Mail, AOL, Android 4.4.4 Mail, Thunderbird, Outlook.com, and Outlook 200­0–2003 all support @font-face. That list may not seem like a lot in the grand scheme of all email clients, especially without any Gmail. However, many of these do occupy top spaces in the email client market share. Indeed, the Apple iPhone’s iOS Mail occupies the very top spot.

A common piece of advice to streamline speed and reduce server requests is condensing styles into as few files as possible. Consequently, one might choose to simply copy the CSS styles directly from Google Font’s stylesheet href/URL in place of the Google-generated <link> or @import code.

For example, the code above for @font-face (CDN) lists the URL provided in Google’s stylesheet at https://fonts.googleapis.com/css?family=Playfair+Display.

However, Chris Coyier at CSS-Tricks reveals that Google Font’s sophisticated CDN automatically matches the font to the best performing font format according to the web browser importing its styles. Therefore, it’s best to simply leave the styles where they are. While Google Font’s @import as is performs a deeper file fetch, at least the web browser only downloads the font format it wants.

(This is already an improvement to performance while retaining accessibility compared to another practice, using @font-face to source five or so font formats altogether regardless of the web browser’s preference.)

Examples of Web Fonts in HTML Emails in the Wild

How I Found the Source Code in These Emails:

Different email clients require different methods to view the source code of the HTML emails in your inbox. Here’s a couple methods that I’ve seen using my desktop computer:

Right-click the email message in the Reading Pane, then select View Source. This won’t work in the Preview.

Click the More button (the three vertical dots) beside the Reply button. Then select Show Original.

Is It Finally Time to Start Using Custom Web Fonts in HTML Emails?

So, go ahead and start add custom web fonts to your HTML email web development. Just include some web safe font stacks, too!