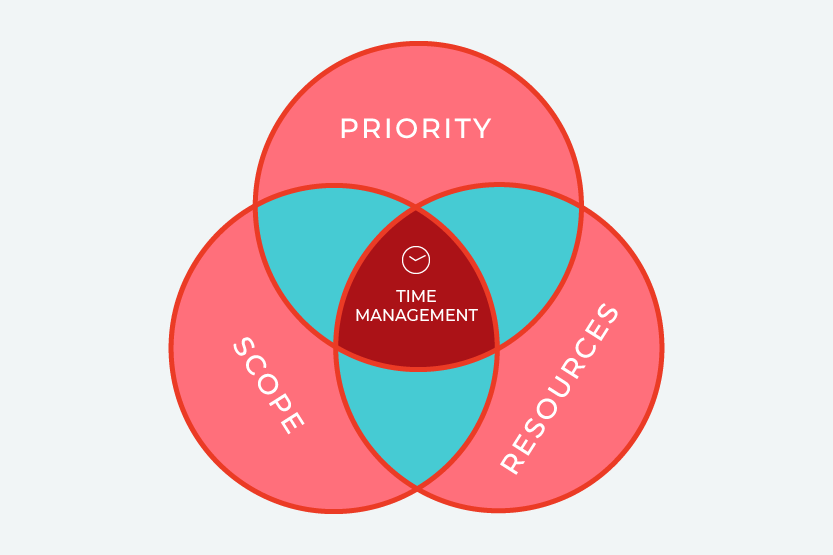 “Fast, good, or cheap: pick two.” Time management can be a tricky balancing act for designers. Like most creative and tech fields, working design is fast-paced. In a perfect world, a designer works fast, good, and achieves fair compensation/costs clients a fair price. However, rarely are time and resources so unlimited in the real world. Therefore, time management for designers requires a different question: “Priority, scope, and resources: pick two.”

Priority determines which projects or tasks are most important and takes precedence over the others deemed less important. For example, an “urgent” project has high-priority. These include design projects that have high visibility, high profit, prestige, or any other benefit. In contrast, most maintenance tasks have low-priority, because they tend to have less impact on the business.

Scope determines the project goals, tasks, deadlines, deliverables, and costs. It represents everything that needs to get done to complete a project. Scope can range widely. Even a project of small tasks but completed at a high volume or in a quick timeframe can result in a large project scope. Consequently, both quantity and timeframe are factors that affect scope.

Resources determine the tools and assistance available to complete a project. Resources can vary widely across different kinds of projects. Sometimes resources are tools. For example, hardware upgrades are useful tools. Additionally, software that automates tasks or expand capabilities also offer help. On the other hand, sometimes resources are people who provide assistance. For instance, senior staff, team members, and specialists are helpful human resources for project management.

Scope creep is a project management term that refers to the uncontrolled growth of a project. One very common example of scope creep in the graphic design world is a sharp increase in the rounds of revisions or number of comps. Additionally, increasing the number of deliverables also results in scope creep. For example, a client requests a logo and visual identity project expand to include the first conference program in that new brand as well. Another example, a set of a dozen web banners picks up additional sizes throughout the life of the project. Proper time management for designers means monitoring scope creep.

A second common obstacle to time management are rush jobs. They are another hot item for designers. Rush jobs are simply projects that must be completed in a faster than normal timeframe. A print production shop I worked at previously had this sign on the work floor: Should I rush the rush job I was rushing before you rushed in? The sign applies humor to a frustrating situation, one most designers find familiar. Time management for designers is tested when there are multiple projects competing for the same priority, scope, and resources. Rush jobs can result in longer hours, skipped tasks, reduced resources, and/or higher costs.

Yet another obstacle are changes to the team. Sometimes, team changes are foreseeable, such as when a colleague goes on vacation. Other team members can fill in for him/her but sometimes, the team must do without the vacationer’s expertise. This impacts project resources. Yet other times, even when an absence is known ahead of time, a sudden project pops up requiring that expertise, causing a rush job upon the vacationer’s return or a delay that might reduce project profits. Furthermore, simultaneous rush jobs might split one team over several different projects, reducing the resources available for any one project.

Creative projects often compete against each other for the same priority, scope, and resources. Again, given that the real world doesn’t have these things in unlimited quantities, designers must choose the best two time management tools to apply focus. Therefore, the third, remaining time management tool often must change.

For example, if priority and scope are the two most important parts of a project, then the designer should increase resources. Bring in additional team members or automate parts of the project to make it more manageable.

Then, if maintaining the same scope and resources is the most important, then decrease that project’s priority to allow more time to complete all its tasks.

Lastly, if priority and resources are the most valuable tools, then the designer should reduce project scope.

I discuss how I manage my time as a designer on my Why Me page.

Although creative projects can grow complicated, several time management obstacles actually have simple solutions. Consider trying the one or a combination of the following:

Unfortunately, some creative projects are demanding. Rather than picking two time management tools, they insist on high priority, large scope, and little resources. However, despite these demands, those three tools don’t suddenly become limitless. Something has to change, but what?

The popular solution for these non-negotiable projects is an intense sprint to the project finish. That is, designers work overtime to complete the project. Designers are hardy folk. Like many creative professionals, designers accept that overtime is often a trade-off to performing the job role they love. Additionally, this solution doesn’t always have a bad ending either.

Indeed, these short intense sprints can be very successful by;

*Nonetheless, this “get it done” approach has one very big caveat: all these benefits are temporary. This project management approach burns-out staff precisely because it is very demanding.

It’s a myth that working more hours gets more done. As a matter of fact, the opposite tends to be true.

Indeed, working more hours actually decreases productivity. Burn-out can result in apathy towards the job, poor health, and even staff departures. It’s also important to recognize the three types of burn-out: neglect (“classic burn-out”), overload (“frenetic burn-out”), and under-challenge. Furthermore, the longer the sprints go on, the more recovery time is needed for the team. What’s more, all these negative effects grow more pronounced as the intense sprints go on.

Most importantly, intense sprints are most effective when done sparingly.

Time management is a crucial skill for any designer. However, the skill is easy to learn. Monitor the status and growth of projects, and re-assess for priority, scope, and resources. Simply re-distribute as needed using one of several of the above solutions.