How Use InDesign: Mouse Rollovers 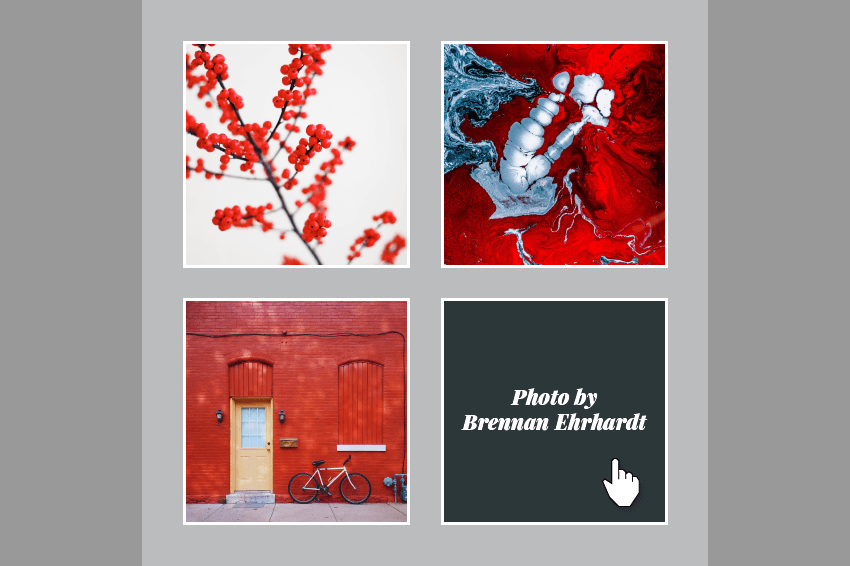 Did you know? Adobe InDesign makes interactive PDFs too! Not limited to just Acrobat Pro, Acrobat DC, InDesign allows hover effects on rollover (or mouseover) just like websites do. Learn how how to use InDesign to make interactive rollover buttons and effects. This tutorial displays a caption when a user hovers over an image in an InDesign interactive PDF.

I focus on the popular user interaction of hover, also known as mouseover or rollover. For this tutorial on interactive InDesign mouse rollovers, I want a byline caption to appear when the user hovers over a photo.

Create the active and passive states of each image.

When placing images on the InDesign document, align the photo (passive) images directly behind their matching byline (active images). By the end of the button creation, these positions will reverse.

Note about inputting buttons and steps in a particular order.

InDesign is picky about the precise order the buttons and their actions are created.

For a guaranteed hover effect, I found I must:

If the exported interactive PDF fails to perform as expected, redo the steps in this order.

Select one of the passive images (the photo), and click the “Convert to Button” button at the bottom-right of the Buttons and Forms.

Label the button and add a rollover event.

Label the button something that’s readily identifiable, such as “Berries Byline,” in the Name This part is especially important if the document has multiple pairs of buttons. Since the byline image is activated by the mouse moving onto the photo image, the button needs a rollover event. In the Event field, select On Roll Over from the dropdown menu. Click the plus icon to add a new Action and select “Show/Hide Buttons and Forms.”

Assign an action to the byline (active) button to hide itself on rollover.

Leave the Visibility to its default setting, a gray X icon for “Ignore.”

Create the second button, label, and add a rollover event.

Click on the byline (active) button in the document to return focus there too. Send it to the back (Ctrl + Shift + [) to bring the photo (passive) button forward. Using the Buttons and Forms panel, convert the image to a button and label appropriately. Set the Event to On Roll Over and add an Action to “Show/Hide Buttons and Forms.” In the Visibility field, click the default gray X icon for “Ignore” twice so it instead shows a crossed-out eye icon for “Hide.”

Assign an action to the same button to ignore on roll-off.

Return to the Event field and now select On Roll Off. Click the plus icon and again select “Show/Hide Buttons and Forms.” Leave the default Visibility action set to “Ignore,” the gray X icon.

In the Application bar, go to Window > File > Export > Save as type: Adobe PDF (interactive). View the PDF. The hover effect should work as expected in both active and passive states.

Repeat these steps as necessary for more buttons!

Here is a summary of the actions needed for each active and passive button pair. Note the order of the steps. Also note how the visibility changes for passive and active buttons are inverse. Alternatively, you can always copy-paste your first button and simply update links and text, too.

This interactive rollover mimics the hover effects encountered in web design. Now your interactive PDFs made in InDesign possess the same capability.

Interactive PDFs may fail to show the photo (passive) button, even when both buttons and all actions are applied, if buttons and actions weren’t entered in a very particular order.

For whatever reason, InDesign requires the button and actions to be made in a particular order. Deviating from this order resulted in the photo failing to show, hover or not. If the test PDF runs like this, correct this problem by converting both buttons back to objects using the “Convert to Object” icon in the Buttons and Forms panel, then converting them back to into buttons again. Add actions in this particular order: create the byline (active) button first, add only its roll over action, then create the photo (passive) button and both of its actions, before finally returning to add the roll off to the byline (active) button.

The Window > Interactive > SWF Preview panel may give “false positives” when testing the buttons. Buttons may appear to work in this window but fail to work in the actual interactive PDF. Be sure to rely on actual exported interactive PDFs for the most accurate testing.

How to Use InDesign: Liquid Layouts for Ad Resizes

How to Use InDesign: Table of Contents

Show and Hide Interactive Web Content with JavaScript in 20 Minutes