Designers In Code: A Panel Moderated By John Maeda 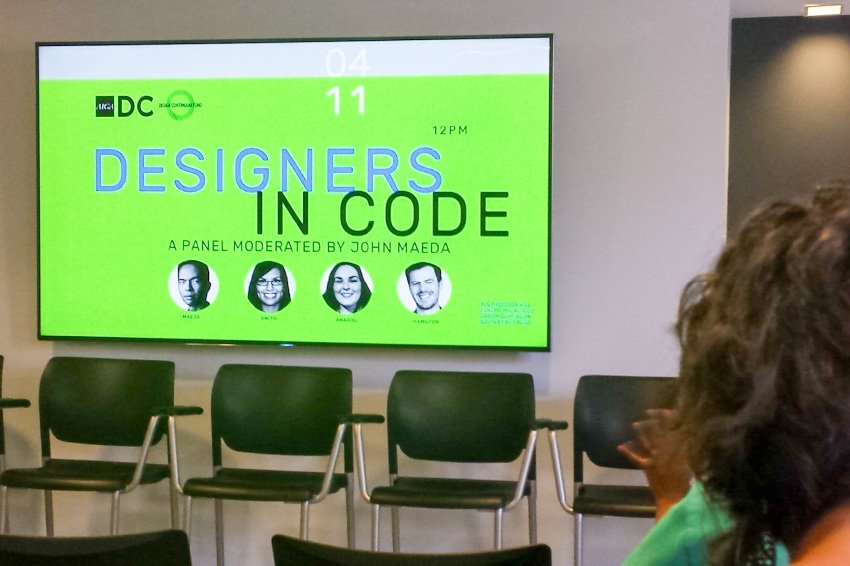 Today’s digital era gives rise to many pressing questions in the creative industry: Is print dead? What makes a “real designer”? Does one need to know how to code to be a competitive designer? Do coders need to be good at math?? John Maeda, a leading digital design expert, answered these questions and more at today’s moderated panel discussion held by AIGA DC.

Maeda opened the discussion with a brief reminisce of similar panels on the same subject in the 1990s. Back then, he said, the industry clearly focused on print design. Art studios and classrooms highlighted poster design. Educational professionals steered curious students away from computers into press rooms. In contrast, digital design is much more accepted in today’s modern creative community. Indeed, Maeda observed, the growing interest in the web created a spectrum of design. On one end stands the old-school artists with “Bahaus Forever tattooed on their cheeks;” and the other, the progressive coders “hacking Linux kernels.”

Coding is where the money is. Coding is the ability to communicate, to survive, in today’s digital world.

“All design is about being a sell-out—a.k.a., being a profitable entity,” Maeda answered. “Coding is where the money is. Coding is the ability to communicate, to survive, in today’s digital world.” The fact is that coding makes designers more competitive, more desirable. The web enables designers to reach audiences on a previously unimaginable scale. Web design allows one to build something sufficiently expensive for a low cost.Besides, as any designer exposed to the business side of the creative industry can attest, more funds equal more freedom. A good designer knows how to increase his or her access to freedom. Web designers can do things previously impossible with design at a marginal cost close to zero, because coding allows one to increase the scale and yet costs one nothing to deliver! Coding, then, is one of those access points to greater creative freedom.

Fortunately for designers, the entry barrier to the digital world of coding has never been lower! In the 1990s, coders worked in simple text programs. Code was hand-written off memory, and the only way to see the design was manually opening and refreshing a web browser. Today’s creative application market includes Adobe Dreamweaver, one of the most popular WYSIWYGs. It includes pre-coded snippets and live previews of coded documents within the app itself. Now even designers who don’t know how to code can create for the web.

Designers can also prototype websites. This represents a career path for digital designers that requires no coding. Jamielyn Smith, one such website prototyper, uses presentation software InVision as well as Webflow to create her website mock-ups, which even include interaction examples of hovers and clicks.

However, the knowledge of coding still gives designers an advantage: coders are aware of both the limitations as well as the freedoms of digital design. (Besides of course, the fact that a more profitable market exists for designers who know coding.)

It’s okay not to know, but it’s not okay to not be curious.

For those intimidated by entering the world of coding, Maeda offers this advice: “It’s okay not to know, but it’s not okay to not be curious.” For comparison, the panelists shared how they made the move from graphic design to digital design:

Smith doesn’t know how to code websites, but that doesn’t stop her from prototyping them. She bridges the gap between designers and developers and works closely with “both sides.” She added she found her transition necessary when attempting to present projects to clients.

Ellen Amaral, a self-described “aggressively curious” Art Director, interacted with people who both designed and coded—and became intensely curious to know how they did it. Three months after college graduation, she threw herself into a web coding course and then immediately into as many code projects as she could grab. Amaral admitted some projects were very frustrating. She designed something but just couldn’t figure out to quite code it to do what she wanted it to do. Then she would figure it out and be glad for the learning. Maeda advised to all designers facing Amaral’s dilemma: “Give yourself license to not knowing something—it changes every month!”

Give yourself license to not knowing something—it changes every month!

Ian Hamilton, a designer and a coder, picked it up during his time freelancing, or to state it more accurately, he invested in himself and applied his self-taught web development to his design projects. Hamilton shared with the audience that his design firm specifically hired him precisely because he knew how to code. The firm found his ability to translate web design work into functional coded projects very attractive.

Despite their varied creative experiences, the panelists confessed that they all encountered an attitude that the design work stops at coding. All panelists emphatically insist it’s not true! Admittedly, coding requires a logical approach to creating (but not math, for the arithmophobic!); nonetheless, coding represents a new medium with several design freedoms. Digital design is different from print design in that there are no fixed sizes (no, not even for phones or computers), and because of that, digital designers must also plan for “graceful degradation” to smaller and smaller sizes with flexible layouts. Still, digital design is not constrained to a page, there can be several! And the pages interactive! And mobile! And still printable!

Digital design offers a new creative world for designers to explore, and we should embrace it. Coding not only makes a designer more desirable to employers and more lucrative in his or her career, it also makes a designer more connected with the world and a better project manager for cross-media design projects. Coders don’t need to be mathematicians or hackers to thrive in this digital world, but coding does help the designer survive.