Work for hire for AFCEA NOVA by Lara Lee while employed at Potomac Management Resources with permission for Lara Lee to display for self-promotion.

The Armed Forces Communications & Electronics Association, Northern Virginia Chapter (AFCEA NOVA) is the largest chapter of AFCEA International, comprising about 7,000 members. This nonprofit professional association connects members from the Air Force, Army, Navy, and Joint Warfighters in government and civilian government agencies. Women in NOVA, or WIN, is an active-subcommittee of the AFCEA NOVA chapter dedicated to supporting women’s participation and diversity in STEM fields.

Upon observing how my modern design for the Young AFCEANs informational poster attracted a lot of traffic, the Women in NOVA (WIN) sub-committee also expressed an interest in a modern rebrand. The rebrand would include redesigning flyers, programs, and emails for its own events.

Prior to this, WIN’s branding duplicated that of the chapter’s at large. Consequently, WIN itself didn’t have a strong visual identity and even published multiple logos.

Additionally, since both the AFCEA NOVA chapter at large and WIN both feature women, WIN must clarify it’s a sub-committee specifically for supporting outreach, networking, and mentoring with women, though not exclusive of men either.

Finally, a common and growing problem among this and other AFCEA NOVA sub-committees was that the marketing efforts failed to resonate with younger members. WIN’s rebrand needed to be more eye-catching, personalized, and modern in appearance to attract younger membership and convey that WIN is indeed active and current with industry trends.

WIN’s new core identity and rebrand was grounded with consistent use of a single logo; new, modern fonts; a clean, minimal aesthetic; and adaptation of logo colors into a harmonious color palette. My rebrand captured WIN’s unique appeal and reinvigorated the brand both with current and new, younger members.

First, I ensured its rebrand was consistent its in logo usage, color palettes, typography, and overall tone. Other sub-committees recycled document templates from the generic AFCEA NOVA branding and applied a color palette generated from their sub-committee’s logo. WIN, however, commonly marketed using two different logos with different colors, and the pre-existing colors are intensely saturated. I applied a new design system WIN’s visual identity to remove its former identity crisis.

I further applied a new typeface to WIN’s branding using the modern, condensed, sans-serif font Ostrich Sans (an open-font easy for volunteers to use as well). On the other hand, I retained the original layout of the event programming and added AFCEA NOVA’s logo to mimic AFCEA NOVA branding and show cohesion. 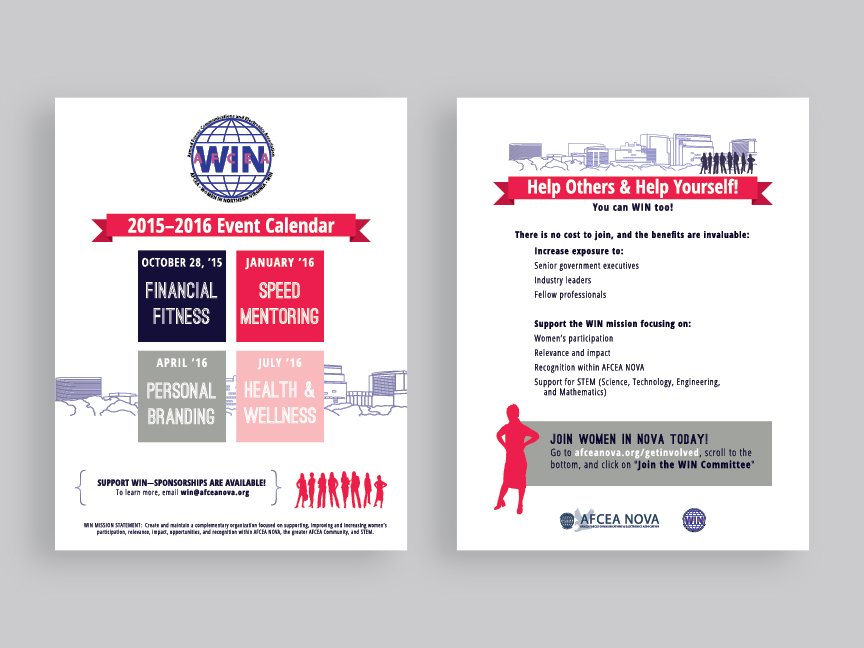 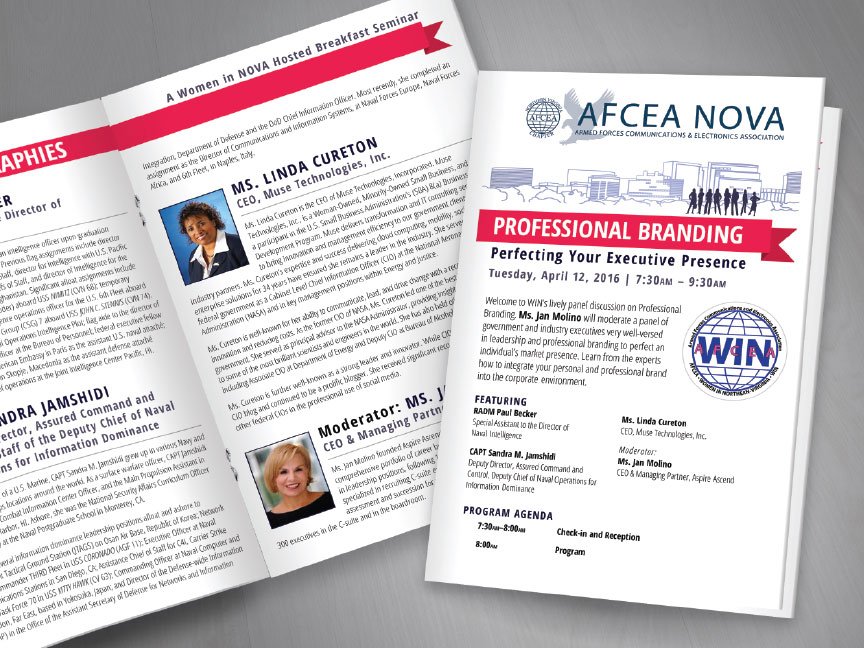 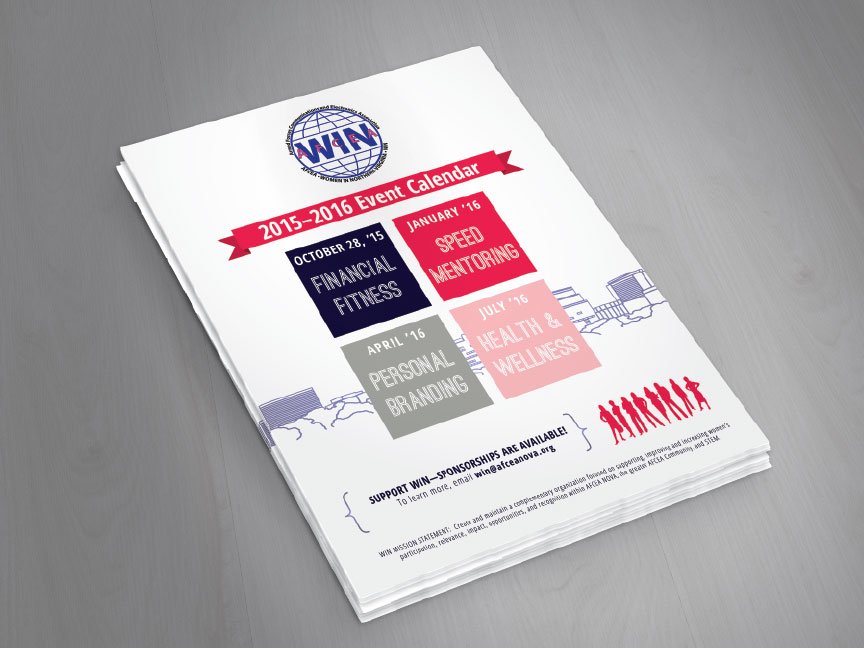 Attracting younger membership first required updating the visual identity of WIN. The first impression must be strong and relevant.

I focused on WIN’s logo variation consisting primarily of purple, rather than pink. I believed the stereotypical pink to brand a women’s organization would suggest WIN was not “up with the times” and may fail to convey that men can join WIN too. Furthermore, since the WIN membership specializes in STEM fields—traditionally considered more masculine—I felt that the mixture of blue and pink and its resulting purple would appeal to a larger base of members.

Besides logos and colors, the new design system in the rebrand updated the typography as well with a bold, condensed san-serif font and very large headlines.

Finally, digital strategy necessitated the creation of WIN’s own digital correspondence: an email template. It must be mobile-friendly and responsive, as younger audiences and digital natives are particularly critical of websites and emails that aren’t.

Like printed programming, WIN didn’t have an email design. Therefore, while retaining the style developed for print, I designed a new email blast template that would entice this year’s sponsors to support WIN.

Unlike the style of previous email blasts, I wanted WIN’s to have a simple layout that translates easily across several screen sizes for not only desktop viewers, but those viewing the email from mobile devices as well. Multiple calls to action were added throughout to make it easy for viewers to find information about WIN and its sponsorship benefits. 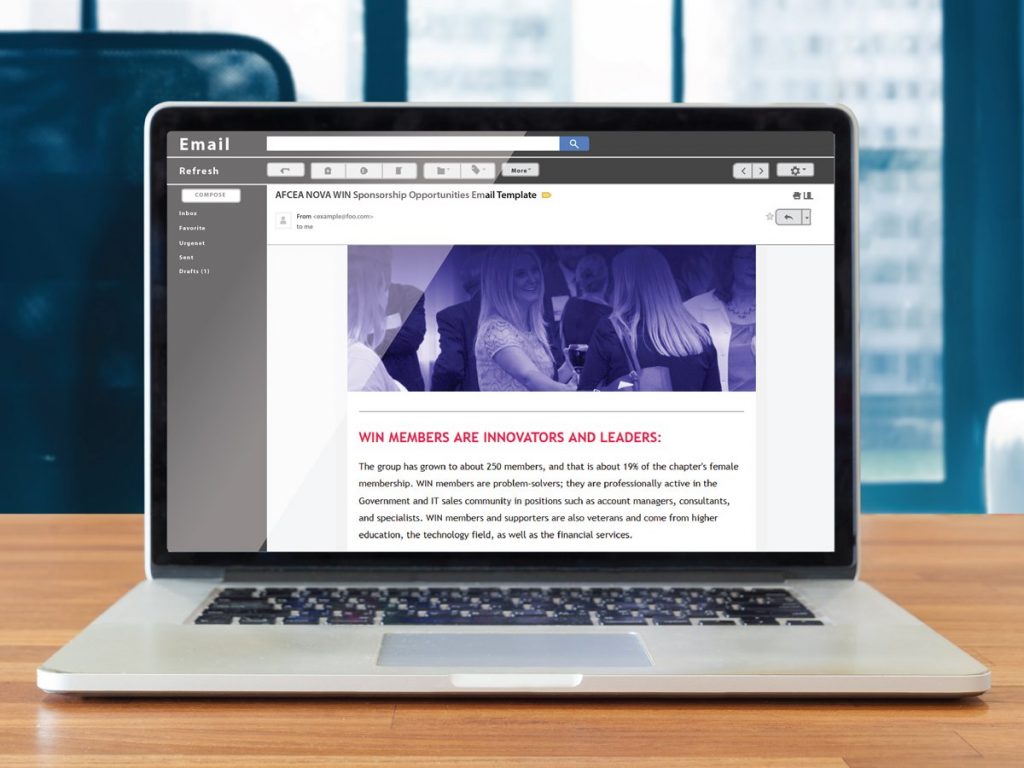 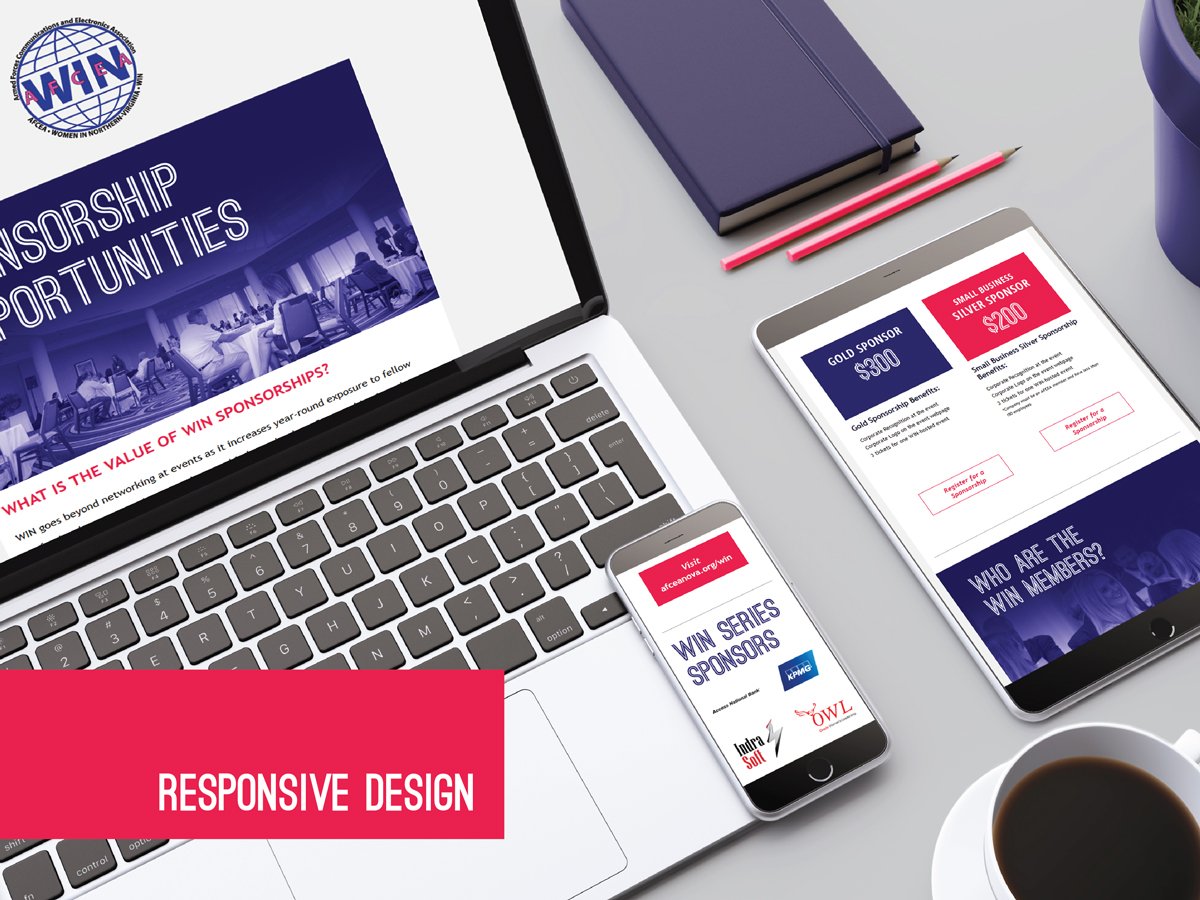