Although much of 2020 stagnated, the world of design did not. There are many 2021 design trends to see! The surprising year of 2020 pushed the boundaries of technology and creativity as many businesses quickly adapted to the new virtual and digital demands of working during a global pandemic. Designers can expect to see more experimentation and creativity during 2021 design trends too.

Like 2019 and 2020, 2021 design trends continue some fan favs like broken grid, gradients, and flat design. Thanks to Pantone’s Colors of the Year, Illuminating Yellow, Gen Z yellow makes a return as well as well as more Living Coral (PMS Color of the Year 2019) and the new Millennial purple. Aegean teal shows on scene as more people are interested in seeing eco-friendly, green things representing responsible businesses.

Unlike 2020 which saw a lot of vibrancy, 2021 graphic design trends seems to soften. Trends like neomorphism, blurry gradients, and muted color palettes (especially nudes in the wake of inclusivity movements!) provide warmth and softness in contrast to the sterile isolation of many of our lives hiding from the pandemic.

Jump Ahead to Your Favorite 2021 Design Trend: 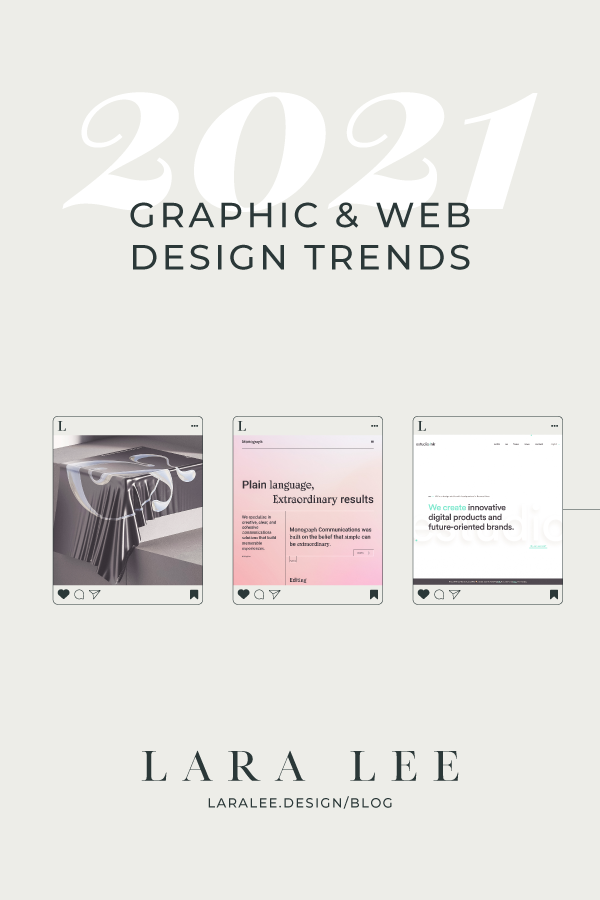 Flat design dominated web design trends for years. While it’s still a web design trend for 2021, 3D illustration is overtaking flat design on the web. Abstract 3D forms, geometric shapes, and characters interact with users and provide contrast to the other flat elements on the page. 3D is often combined with motion graphics and animations to add a life-like appearance.

“Greenery” has definitely been a theme lately. Advocacy for eco-friendly products and responsible business practices have fueled it, but so too has the pandemic. As the vast majority of us were quarantined at home in 2020, we enjoyed the wonders of staycations in our own backyards. Gardening and birdwatching became common past times to pass the time. Perhaps the 2017 Pantone Color of the Year, Greenery, came too early. Now it’s back—as Aegean teal.

In graphic and web design, Aegean teal is bright and vibrant with optimism.

Broken grid is a design method that encourages elements to break out of the traditional columned layouts. Overlapping text, oversized pictures, and moving parallax effects that clashes pieces of content into each other all characterize a broken grid layout.

Brutalism is a weird one! I saw this trend last year as well.

Originally brutalism was an architectural design aesthetic that promoted the raw use of materials and forms. It was bare-boned, unrefined, and maybe a little boring. Brutalist architecture can be simple almost to a fault.

Similarly, there’s a popular kind of minimalist brutalism in web design. These brutalist designs are similarly raw and unrefined. They prioritize sharing content without the distraction of color palettes, illustrations, fonts, or other details.

On the other hand, modern-day web designers also used brutalism to experiment with uniquely web forms. It’s still raw and unrefined, but it’s heavy with detail and distraction indeed. These maximalist brutalist designs seem to jam-pack content with colors, animations, fonts, and effects. They reference meme culture. They crack pop culture jokes. They clash, they flash. They can be called, well, ugly! They take advantage of bright RGB colors outside the print spectrum, and use computers to create movies and movements. Sometimes they don’t make sense, but they’re supposed to be fun and experimental.

Like other 2021 design trends like broken grid and maximalist brutalism, experimental typography breaks loose from traditional design to explore new, interesting forms. It takes advantage of the popular 2020 design trend of big typography, which is forgiving on detail, to stretch and embellish typefaces. Unexpected font pairings occur, and sometimes the text even glitches.

Marked by the optimism, vibrancy, and sassiness of the generation, Gen Z Yellow is warm and welcoming.  Yellow isn’t dangerous—it’s energizing. Gen Z Yellow is not a particular hue and tone like Millennial Pink was. On the contrary, Gen Z Yellow encompasses a whole range of yellow colors that convey warmth and brightness.

Simple geometric shapes, lines, as well as abstract, inorganic forms have replaced detailed concepts and illustrations. They extend the brand in a simple, non-distracting manner. They are also extremely friendly designs to execute responsively. From small smartphone apps, to high-def computer monitors, to mailed brochures, to wide-scale digital signage at the event, geometric shapes resize without becoming confusing or unreadable.

Glitch effects! This 2021 design trend capitalizes on the popularity of videos and animations to bring the digital vibe to other media. Glitch effects aren’t just appearing in videos—they also showing up in experimental typography, logos, and even printed works. Glitch effects bring movement to static forms. They also convey the concepts of “virtual” and “digital” quickly, which is why they’ve also been popular to promote newly virtual conferences and events.

Some glitch effects include:

Gradients have been trending for a while, and they’re similarly here to stay for 2021 design trends too. Of course, many gradients are bright and vibrant much like the 2020 trend.

However, 2021 gradients are often softer than years past. Today’s gradients move inorganically versus the traditional geometric gradient shapes like linear, radial, and edge. Adobe even debuted Illustrator’s new freeform gradient to this effect in Fall 2019. Photoshop actions like light leaks can also soften gradients.

One result of the soft gradients of 2021 is glassmorphism.

Glassmorphism describes the design technique of softening images using a background blur to create the effect of frosted glass. Windows 10’s latest “Fluent Design” UIs revives the frosted glass effect from Windows 7’s Aero Glass. So too does macOS Big Sur show the glassy blur. Even CSS now can provide this effect all over the web using box-shadows and blur filters.

The craftiness of last year means the 2020 trend of hand-drawn illustration continues strong into 2021. This human touch adds authenticity to any design. It further results in a unique look that differentiates brands. Most often, these kinds of illustration accentuate other content and design elements, such as team portraits and iconography.

Millennial Pink, emerging in summer 2016, grow into popularity for its natural color, softness, and flexibility. Initially it encompassed one particular hue of rose quartz, peachy-blushy pink, but it expanded into include a range of pinks. It’s refreshing and more gender-neutral than feminine. Millennial pinks gives a node to greater gender awareness starting around this time. Gen Z Yellow followed suite in spring 2018.

Now kicking off 2021 is Millennial Purple. Millennial Purple, just like Millennial Pink and Gen Z Yellow, also encompasses a wide range of purple hues from periwinkle to lilac to lavender to fuchsia. Millennial Purple is marked by melodrama—and it’s described as a mixture of sad and happy vibes that characterize the economic struggles of the generation. Fashion and interior design especially favor this color.

Unlike 2020’s bold, vibrant, and electrifying color palettes, 2021 is seeing much more subdued hues. Muted, unsaturated, and sometimes even outright monochromatic palettes colorize the latest graphic and web design layouts. These muted colors are calming, simple, and non-distracting. Rather than drawing attention to jarring colors, the muted palettes simply reinforce the content that’s already there.

Nude palettes in particular have been dominating the muted color trends of 2021. Social awareness for inclusivity influenced design to add this human element to their interfaces as well. Blush tones, creams, tans, and browns all work well together.

Although flat design is waning, elements of its simple, low-contrast designs live on in neomorphistic designs.

UI/UX designer Alexander Plyuto “started” neomorphism with his banking app UI design in fall 2019. He showcased soft subtle shadows on minimalist, mostly white interfaces, which have since become trademark characteristics of neomorphism. The shadows clue users to interactive elements on the page in way flat design failed to do, but they are low-opacity, low-contrast shadows that don’t compete with the actual content.

This design can be problematic, as the lack of contrast makes the design difficult to navigate. It’s best used sparingly and in combination with other, obvious design treatments.

Transitional/Neoclassical fonts have been re-appearing, especially in serifed typefaces with small slabs. They have tiled axes most evident in the O’s and high contrast strokes. Many modern interpretations remove the thin strokes altogether for incomplete letter forms instead finished only by implied lines.

Exceedingly popular are the Grotesque fonts. Lettering artist Joseph Alessio shares in Smashing Magazine a breakdown of the characteristics of Grotesque and other styles quite well. However, Grotesque can be summed up as early sans serifs with irregular curves and weight distributions, often with tall letter heights. Letters A and G can particularly stand out.

What has been really popular so far in 2021 design trends has been the font combination of these two styles: transitional serif fonts plus grotesque fonts.

The contrast between serif and sans serifs has been a popular font pairing for at least the last decade. Yet this 2021 combination really emphasizes the contrasting sizes. Transitional typography originated about two centuries before Grotesque. Yet both unequally distribute weight around the characters. They are imperfect and asymmetrical, unlike several monoline, geometric typefaces that were trending heavily a few years ago. It is precisely the big contrast this makes this experimental font pairing so modern.

What I Read to Stay Current on Design Trends